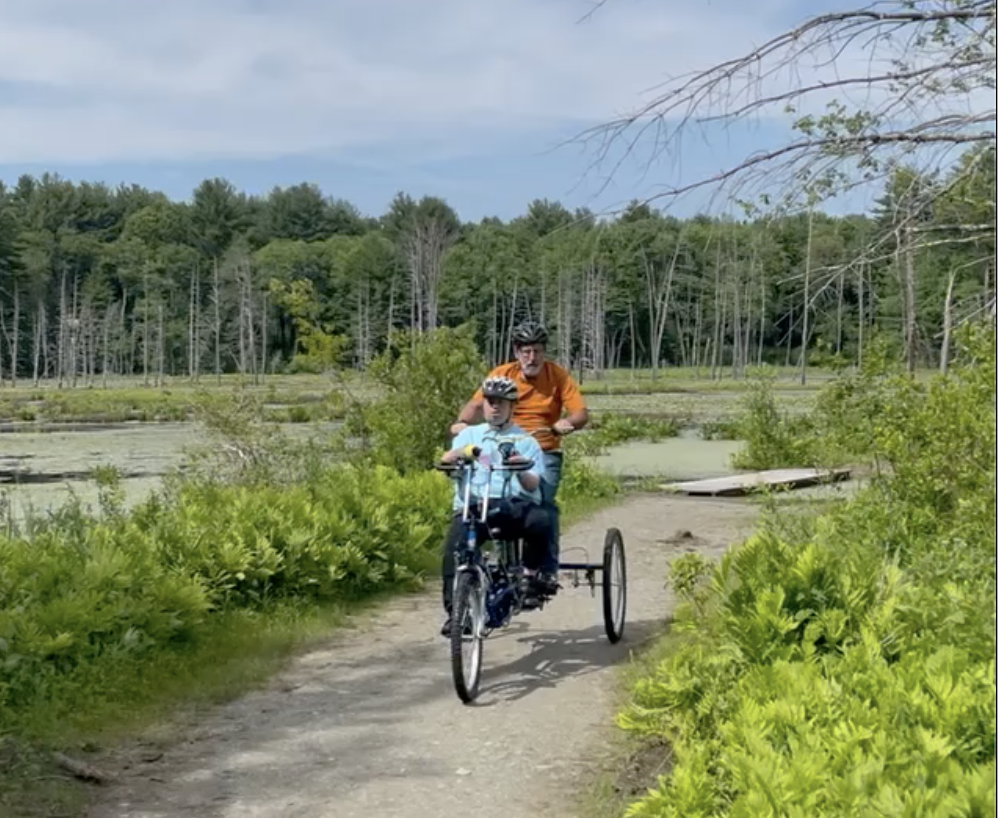 37-year-old Jason had never ridden a bike before now. When he was in grade school, he used to go outside and look at the bikes in the bike rack and even swung his leg over one once to pretend to ride one, but due to a fear of falling and aversion to change, it was never an option for him.

Jason has been a long-time Waypoint participant. He goes on hikes and tandem kayaks and “its good for him to get out into nature” his parents say. But always when asked if he wants to try a new trail or go farther than last time, he says, “No. No. No.” Jason likes his routine. With his Autism, things make Jason happy when they are predictable. But his new Waypoint staff that have been working with him, Michelle and Jim, dug deeper than any Waypoint staff have ever before! They even called Jason’s old teachers and friends and asked for advice. “How do we motivate Jason to take a risk?” The answer was “build trust through interests.”

So at their weekly walks, Sesame Street characters starting showing up on trail signs and trees. A scavenger hunt would be set up before-hand and Jason would find all the laminated pictures of characters (keeping for himself his favorites and bringing them home to the dining room table). He was starting to go farther and try new trails after finding them all!

And that’s when the bike showed up. At first, Jason said “NO. NO. NO”. But with Dad nearby, Grover and Bert in hand, and staff understanding that “No” sometimes means “Wait,” Jason tried a tandem trike! No helmet at first, and barely pedaling, but he did it! By the third week, Jason would “put on his hat” and dad said, his legs would be shaking by the end of the trip with all the pedaling! Last week, Jason was running across the parking lot and trying to pull the 300 lb piece of equipment down from the truck bed by himself!

At age 37, a new world has opened up for Jason and his family. Through the trust found in a supportive and creative team, Jason has a new-found interest and unlocked new possibilities. His family is thrilled and is even taking the trike up to Maine this summer on vacation.

So shout-out to Jason for pushing boundaries, trying something new, and realizing his life-long dream of riding a bike!